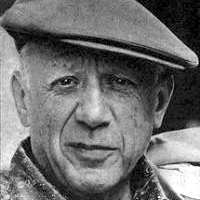 In 1932 Picasso turned 50 and this was a pivotal year for him. His paintings were selling and he was living a life of luxury with his wife Olga in Paris. At the time he was also having an affair with a woman called Marie-Therese and she became the catalyst or a new direction in his art.

It is this new wave in his style that the Tate Modern is focusing the exhibition on. With over 100 of his paintings, drawings and sculptures being exhibited the show charts his month by month development in 1932.

His lover is central to his works. Their affair was ‘clandestine’ and she is often disguised as something else in his paintings – a hazy purple memory, a tangle of limbs…

The exhibtion is open until September 9th, 2018 so why not take some time out and visit…make up your own mind about the paintings that have been described as ‘disturbing’ by Will Gompertz on BBC News online.

I’d love to hear what you think…Elisa x