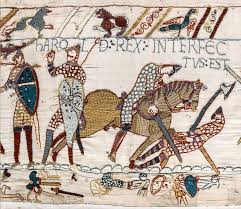 I remember doing history lessons at school and my homework was to draw a section of the Bayeux Tapestry and write the story it told. The tapestry actually tells the story of the future William I’s conquest of England, culminating in the Battle of Hastings and the defeat of Harold in 1066.

So this is exciting news for me as well as many historians and art lovers: It has been recently reported in the press that France has agreed The Bayeux Tapestry may leave its shores for the first time in 950 years. It is on permanent display at a museum in the town of Bayeux, in Normandy, and has very rarely been moved.

The French President Emmanuel Macron has announced the loan during his visit to the UK recently although he has said that the tapestry, depicting the Norman Conquest of England, would not be transferred before 2020. There will be a number of tests carried out to check it is safe for the tapestry to be moved and transported.

It has not yet been decided where the tapestry will be displayed, although there has been mention of the British Museum, but I am sure thousands of people, including tourists will flock to see it when it does get here. I know I will be first in the queue…