My favourite books for children are The Famous Five.

I read them myself as a child and encouraged my son to read them. They became my friends and I joined in every adventure with them even though I was not really there (but I was in my mind).

I scrutinised every cover as I wanted to know what they really looked like. Now I have found some information on who the children were based on.

The real-life Famous Five as you see them on the covers, were based on the illustrator’s four children. Although there were only four of them Roger, Francis, Nicholas and Justin they were the models the illustrator used.

They inspired the covers on some of Enid Blyton’s best-loved books. A generation of children grew up with their mother Mary Gernat’s colourful drawings. Roger How, Gernat’s second son is planning an exhibition of her work after finding a whole archive of her work in his father’s attic.

Roger How said that she would often ask her four sons to model: “I was about four or five and my older brother Francis must have been about nine. She would ask us to pose like we were pulling on a rope, or firing a bow and arrow. She worked very quickly so we never had to pose for long, my mother was a natural artist.

She would draw a few quick lines and that was all she needed. None of the children on the covers looked like us, we were just creating the poses.”

Mary Gernat did the covers for about 100 children’s books. I am so looking forward to seeing this exhibition. 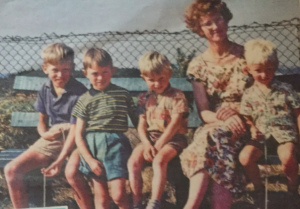