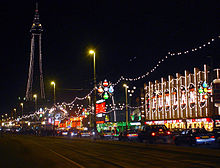 The illuminations were originally founded in 1879 and began with just a row of eight arc lamps set on 60ft high poles along the Blackpool seafront.

At the time public street lighting was something new and the lights were referred to as  ‘artificial sunshine’ by the public. They must have literally been dazzled by the sight and so people flocked to Blackpool to see them full of curiosity. Don’t forget that this was twelve months before the patent of the electric light bulb and homes would have been lit by candles and oil lamps up until that time.

The first static illuminations as we know them today were erected in 1912. That year marked the start of the Centenary period (with breaks in the display only for the two World Wars.) The Illuminations celebrated their Centenary in 2012, which was also the Diamond Jubilee Year of Queen Elizabeth II.

I remember going to the illuminations when I was growing up with my family in Yorkshire and it was a big exciting experience which I will always treasure and it involved all of my Italian family. I remember being in awe of the thousands of lights lighting up the whole seafront with hundreds of light bulbs.

This year the English tenor and actor Alfie Boe will have the honour of switching the 2018 Blackpool Illuminations on. Alfie was born in Blackpool and grew up in Fleetwood. Alfie has performed in the Broadway production of La Bohème, Les Misérables at Londons O2 arena, he also has multiple platinum albums and has sell out tours in the UK. It will make the switch on show a truly memorable event again this year and everyone hopes he will add a few songs before he flicks the historic illimunations Switch and they stay alight for another 66 nights!

There have been many incredible people honoured with the Illuminations’ Switch On and the list can be found here if you’d like to know more.