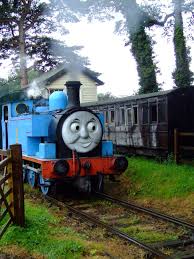 Our dear Thomas the Tank Engine is going multicultural and has even had discussions to ensure it is politically correct with the United Nations. I’m not sure how I really feel about this! While I believe in being inclusive and opening the world of classic children’s stories to all I kind of believe that Thomas the Tank Engine is quintessentially English and should remain so.

New character names from around the world will be introduced and some of these include:

Hong-Mei, a No. 1 blue tank engine from China

Other names to be introduced include Ashima from India, Yong Bao from China and Shane from Australia.

If this is the case, why then are Italian and Greek names not included or Polish and Romanian names? By introducing foreign names from around the world are the writers not alienating certain individuals and countries through their choice of nationalities to be included? Should names such as Stavros, Angelo, Georgos and Roksana not be included?

Thomas the Tank Engine was created by Reverend Wilbert Awdry as part of his Railway Series and the books have become a global brand with television programmes, films, toys, board games and live attractions. In light of this do we really need to change anything or is it going a step too far to try and be politically correct in  a world where everyone loves Thomas the Tank and his friends just as they are.

And if we begin changing our traditional children’s stories do we dress Paddington bear up in an Arabian costume …or Texan rancher and take away other English states of dress like his raincoat and wellies? How far do we have to go until we reach the ridiculous?

What do you think?