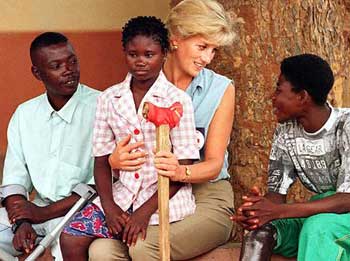 Today’s post in the ‘Charity and the people behind them’ series is about a person I admired and still think about today. She’s often in my thoughts and as I wrote the post on Mother Teresa I thought about her and how she was so like a modern day Mother Teresa. I’m talking about Princess Diana.

Tributes to her include the Princess Diana Fountain and the Diana Memorial Playground although I remember how many people thought it was not a fitting tribute to her memory and the work she did. I think some people would have preferred a statue of her in Hyde Park or in one of the Royal Parks in London.

Her charity work attracted global attention. In her words, ‘I would like to be a queen in the hearts of the people’ and ‘The worst illness of our time is that so many people have to suffer from never being loved’. Princess Diana shook the hand of a man suffering with HIV/Aids and this showed the world how genuine she was in her thoughts and actions. What an amazingly selfless thing to do! I’m emotional thinking about it.

Similarly, as patron of The Leprosy Mission, she visited hospitals in India, Nepal and Zimbabwe and by spending time with patients, she dispelled one of the myths surrounding the illness—that it can be passed on by touch. ‘It has always been my concern to touch people with leprosy, trying to show in a simple action that they are not reviled, nor are we repulsed,’ she said.

She not only gave her time but her love and understanding, her empathy and her heart to so many individual causes and people too.

She lead the way on banning landmines and Prince Harry, now patron of leading landmine charity, The HALO Trust, has recently called for the world to become free of the weapons by 2025.

Showing we care is a way that we can all give to charity and those supported by them. We can sit and listen, we can read to a patient, we can drop in a bag of shopping or pop in to make them something to eat or smile at the homeless man on your high street.

Next time you’re rushing about why not think about those who can’t and maybe give them some of your time…it’s sure to make all the difference.

Until next time, Elisa x